A very few species exhibit negligible senescence (NS). Theorists consider an organism negligibly senescent if it does not exhibit any measurable decline in survival characteristics such as strength or mobility with age, does not have a gradually increasing death rate with age, and also does not exhibit any measurable reduction in reproductive ability with age. The few NS species live among a wide variety of similar senescing species.

The Aldebra giant tortoise has a measured maximum life span (so far) of 255 years.

The Rougheye rockfish (Sebastes aleutianus) has been measured at 205 years.

Lobsters are also believed to be negligibly senescent and even apparently have increased reproductive capacity with age.

The lake sturgeon (Acipenser fulvescens) is long-lived (152 years) and may be NS.

The naked mole rat (Heterocephalus glaberis) is the only one of approximately 5500 mammal species known to exhibit NS. These approximately mouse-size (35 grams) rodents have been observed to live 28 years vs. 1-3 years for similarly sized rodents and longer than any other rodent. Cancer has not been observed in this species.

Some clams such as Panopea generosa have long lives (~160 years) and may be NS.

Organisms that do not age or age immeasurably slowly still die of predator attack, accident, starvation, exposure to adverse environmental conditions, and diseases. Extremely old specimens are therefore extremely rare. In some cases, measuring the age of a caught wild specimen requires killing the animal in order to measure age marks (similar to tree rings) on internal bones. We therefore have no way of knowing the maximum age that could be achieved by one of these organisms. Note that the key point with NS is lack of gradual deterioration. A hypothetical species that lived for 20 years and then died suddenly from some internal process (e.g. semelparity) would still be considered a NS species. 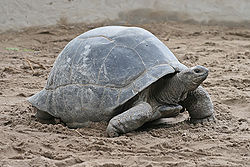 Theories to the effect that gradual deterioration is an unavoidable result of fundamental physical or chemical limitations obviously have a problem with NS. Although there are differences in metabolism between species, (which could be considered the rate at which the organism lives its life in a deterioration scenario), these differences are insufficient to explain the enormous differences in observed life spans, especially between species with similar metabolisms.

Programmed theories of aging assume that a very long life (relative to age of reproductive maturity) has at least a weak evolutionary disadvantage. (See Evolutionary Value of Life.) It is apparent from its rarity and species diversity that each current NS species individually and independently acquired its NS trait rather than inheriting it from a series of ancestor species. NS is therefore, in evolutionary terms, a recent development. This is consistent with theories to the effect that senescence is the manifestation of a complex life span regulation system (see Aging Mechanisms concept 4). We can readily imagine that a few mutations could disable such a mechanism inherited from an ancestor species resulting in the observed NS trait. The evolutionary disadvantage of an excessive life span would explain why there are not presently more NS species. Previous NS species either became extinct or redeveloped senescence. This scenario requires that the evolutionary disadvantage of a long life be sufficiently weak as to allow the NS species to, at least temporarily, propagate their NS trait within their species. According to this view, NS species are "throwbacks" and evolutionary "dead ends."

The evolutionary advantage or disadvantage of a long life is a very general concept that presumably applies to any present or past animal. Senescent species therefore acquired their senescent designs from a long series of ancestor species and were the immediate ancestors of each NS species. We can infer that senescence characteristics were refined by evolutionary forces during a very long evolutionary time frame. Senescence has been evolutionarily successful where NS has not.

Complex organisms are known to possess a large variety of maintenance and repair capabilities. Wounds heal, dead cells are replaced, infections are fought. Such complex maintenance mechanisms are generally beneficial and thus also have a long evolutionary history. "Evolutionary" non-programmed theories of aging assume that a long life time (relative to reproductive maturity) has either a weak evolutionary benefit or is neutral. Some non-programmed theories depend on the idea that a potentially large number of maintenance and repair mechanisms have independently evolved species-specific efficiencies explaining why different species have different life spans (see Aging Mechanisms concept 2). Senescence is caused by the gradual accumulation of unrepaired damage. Each species has evolved or devolved to possess only the maintenance mechanism efficiencies it needed to achieve a life span necessary for life goals such as reproduction. Once those goals were achieved there was no evolutionary force toward increasing or maintaining maintenance efficiency and thereby life span. This concept becomes progressively more awkward as life span increases. Most repair activities such as those mentioned above operate on rather short time frames (weeks). Need for sleep, generally seen as a maintenance function, is even shorter-term. We could believe that a mouse (2 year life span) has repair mechanisms that are 99 percent efficient. Maybe a housecat has mechanisms 99.9 percent efficient and a human mechanisms 99.99 percent efficient. There are difficulties envisioning how this would work in practice. If "replace dead cells" is an example of a maintenance mechanism, how would it know to replace only 99 percent of the cells or 99.9 percent of the cells?

If efficiency is the issue are we really to believe that some species, during the time a single species existed, accidentally developed 99.9999 percent efficiency in a potentially large number of repair mechanisms (e.g. zero cancer)?  It is much more plausible that a complex mechanism was disabled by accidental mutations than that multiple complex mechanisms were grossly enhanced by accidental mutations, independently, in multiple species. In this context "accidental" means that there was no natural selection force acting to select and retain (or reject) the mutations.

Proponents of the non-programmed theories claim that each NS species has some hidden need for a very long life not possessed by any similar senescent species and thus evolved more efficient maintenance. Indeed, many NS species have relatively late ages of reproductive maturity, which would necessarily lead to somewhat longer life span requirements. This not true of the naked mole rat, which is reproductively mature at one year of age. Proponents of programmed theories point out that a life span regulation mechanism might share a clock function with the mechanism that determines reproductive maturity and that therefore the same mutations could have caused both effects. Delayed reproductive maturity is, in effect, caused by NS as opposed to causing NS.

Other non-programmed theories, based on the idea that long life has a weak evolutionary benefit, contend that aging is an unavoidable side effect of some necessary function. Rigid linkage between the senescing side effect and the necessary function prevented the evolution process from evolving non-senescence during a very long evolutionary time frame. That is, evolution could not find a way to achieve the mild benefit (longer life) without incurring the more adverse side-effect. These theories have similar problems explaining why NS species apparently avoided the side effect problem suffered by similar senescing species, and worse, were able to do so during the much shorter time the single species existed! Specific theories that aging is an unavoidable side effect of a mechanism that helps prevent cancer would appear to have a problem with the naked mole rat!